These days, a story about waitstaff receiving outrageously large tips is bound to go viral.

But Last Sunday, waitress Megan King found herself overwhelmed with emotion from a simple heartfelt note of appreciation.

Megan detailed her experience with Newsweek: “She came in about halfway through my 17-hour shift, and it was on Sunday, which is always pretty busy. About halfway through her meal, it started to slow down so we chatted for a few minutes. Small talk, nothing too deep. She told me she was almost 70… and she just wanted to stop by an old favorite for a bite.”

Megan said the interaction was not out of the ordinary. But upon reading the woman’s thank you note that accompanied the $3 tip on her $11 check, she was brought to tears. 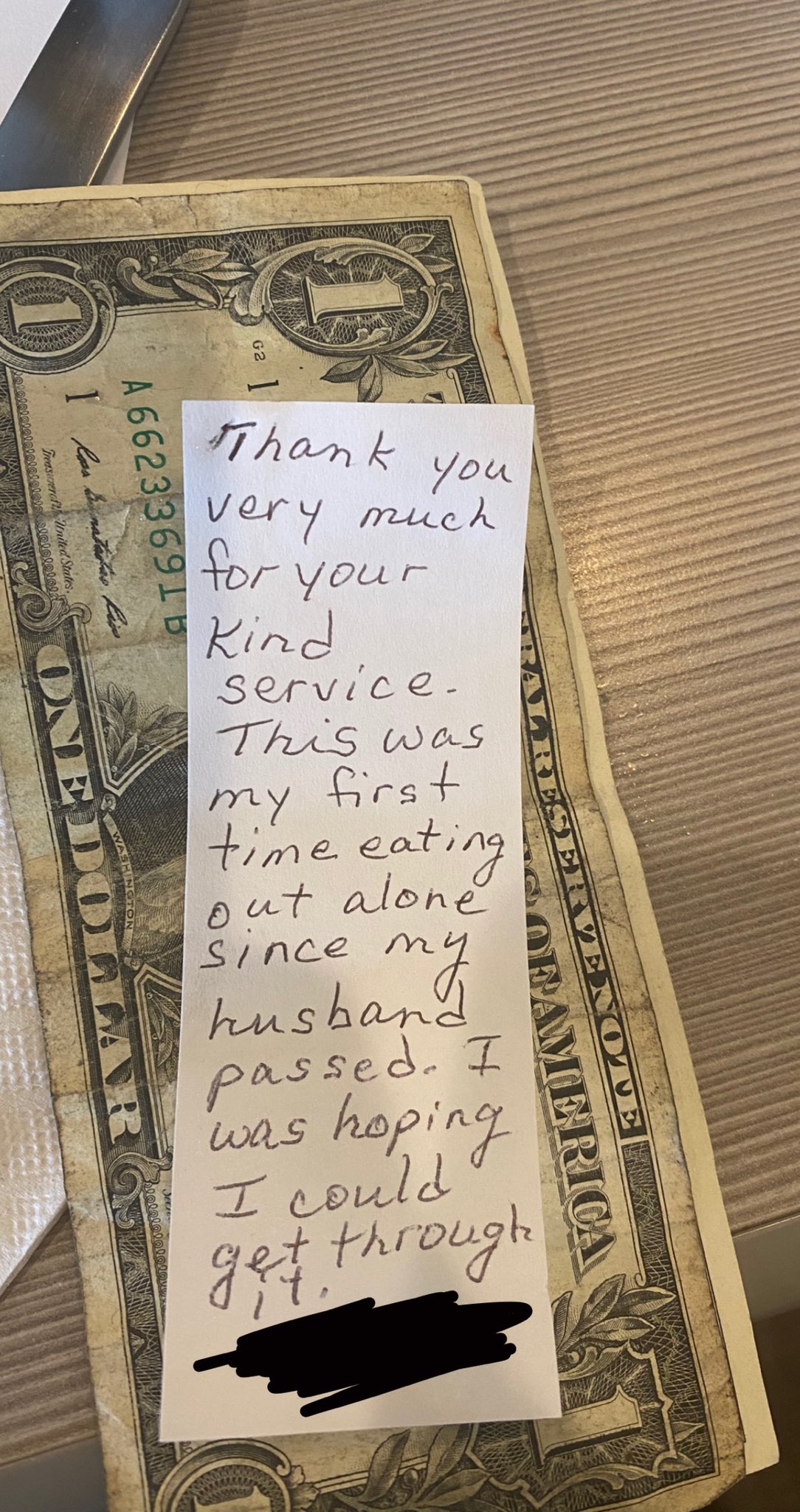 The note read: “Thank you very much for your kind service. This was my first time eating out alone since my husband passed. I was hoping I could get through it.”

Megan recalled the woman’s quiet and contemplative demeanor, but her waitress instincts assumed it was about an issue with the food. Looking back on it, Megan wished she’d been more alert to her customer’s cues.

“I wish I would’ve taken her quiet as an invitation. I think that’s what she wanted, looking back… I guess she did, in a way. [She needed] an ear,” she told Newsweek.

Megan shared how she had to pull herself back together in the ladies’ room after the note overwhelmed her with emotion. She shared a photo of the note and her tearful reaction to Twitter, with a simple caption: “in pain”.

The tweet has since earned over 826,000 likes!One comment read, “[T]hat’s super sad, but also sweet at the same time,” while another commented, “[I] just wanna give whoever wrote this note a hug.”

Meanwhile, some pointed out their assumptions that the woman had only left a dollar as a measly tip. Megan quickly defended the patron and argued against the stereotype that the elderly are bad tippers.

Megan told Newsweek, “A lot of our customers are older and living on fixed incomes, so they tip what they can. They are always welcome, no matter how much or little they tip.”

Tipping is a way of showing appreciation for good service. For Megan, it’s not about how big the tip is, but the importance of human interaction.

The $3 tip for an $11 check was “more than enough,” said Megan, who added that she wouldn’t have cared if it had been smaller. Their interaction by itself was already priceless.